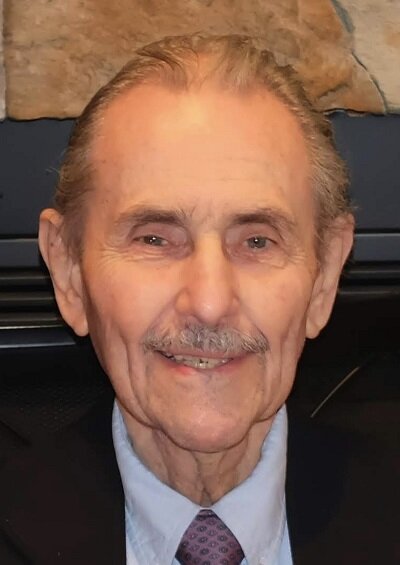 Please share a memory of Frederick to include in a keepsake book for family and friends.
View Tribute Book

Frederick August Rohmeyer, 95, of Manalapan, passed away on Monday, May 30, 2022, at home. Frederick attended and graduated from Erasmus Hall in Brooklyn, New York.  He then went on to Marywood University in Scranton Pennsylvania.

Frederick was a proud and patriotic WWII Veteran US Navy Seaman Second Class, Pacific Theater Asiatic Campaign.  He served on the USS Epping Forest and the USS Fall River where he participated in Operation Cross Roads in the Marshall Island Atomic Bomb Testing and is considered an atomic veteran.  He was also part of the Imperial Domain of the Golden Dragon and considered a Gold Shellback.  After serving his country, Frederick worked in accounting and insurance.  Fred married the love of his life, Anne in 1952 and together they began to grow their family, first in Brooklyn and later in Manalapan, NJ, where they were one of the first Yorktown development residents in 1964.

A devout Catholic, Fred was a longtime CCD Teacher and communicant of Our Lady of Mercy and St. Thomas More Roman Catholic Church Manalapan.  He was his children’s biggest sports fan and enjoyed watching all his children participate in numerous sports in the Manalapan area.  He was a loving and devoted husband, a true role model.  He enjoyed gardening and fishing, large family vacations and was a lifelong NY Giants and NY Ranger Fan.  He was known for his baking, especially the Christmas stollen and cream puffs.  Fred and Anne enjoyed hosting weekly Sunday dinners with children and grandchildren.  They absolutely loved watching the generations grow.

Friends and family are invited to visit on Thursday, June 2nd, from 4:00pm to 8:00pm, at Freeman Manalapan Marlboro Funeral Home, 344 Route 9 North, Manalapan.  A funeral liturgy will be held at St. Thomas More Roman Catholic Church, Manalapan on Friday, June 3rd,  at 10:00am.  To leave a condolence or find directions, visit www.freemanfuneralhomes.com

Share Your Memory of
Frederick
Upload Your Memory View All Memories
Be the first to upload a memory!
Share A Memory