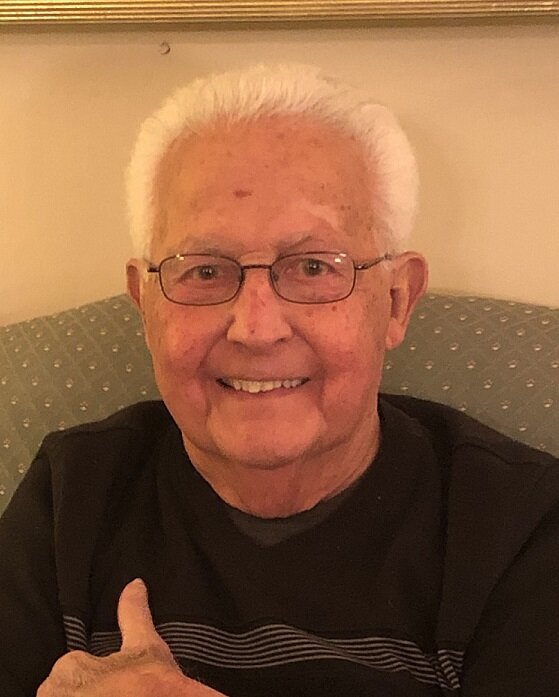 Services are private at this time

Please share a memory of Nicholas to include in a keepsake book for family and friends.
View Tribute Book

Nicholas Frank DePasquale passed away peacefully in his home on Sunday, November 20, 2022.  He was 93 years old.  He is survived by his wife Antoinette “Netty” (Amato), his daughters Joan (Woodhull) and Gail (Montegary), his grandchildren Tim, Kyle, Katie, Michael and Danny, and great grandchildren Blake, Taylor Rhen, Claire, Mary, Luke and Brooks.  He will be laid to rest at the BG William C. Doyle Veterans Memorial Cemetary with a private family ceremony.

Nick was born on February 23, 1929, in Brooklyn, NY.   His father, Anthony, was a barber and his mother, Maria, a homemaker.  He had two sisters, Marie (Gioia) and Rosie (DeLucia.) As a child growing up in Brooklyn, he loved the NY Dodgers, trips to Coney Island and listening to music on the radio.   He went to a vocational high school and focused on radio tech.  He served in the US Army during the Korean War from 1951-1953.

Once home, he and Netty were married on June 19,1954 at Regina Pacis church in Brooklyn.  Soon after, they moved to “the country” - Freehold, NJ, where they raised their family and he lived for the rest of his life.

Nick held numerous jobs over the years.  While he was still living in Brooklyn, his first job was as a runner for an insurance broker Mathers Limited on Wall Street.  With his very first paycheck, he bought an ice box for his mother - just one small example of his giving nature.  In 1961 he joined IBM in Dayton, NJ as a second shift printing press operator which gave him time to run his own lawn service during the daytime.  Netty joined him at IBM in 1967 and both worked there until they retired.

Nick enjoyed family vacations with all the kids in Manasquan, LBI, Walnut Valley PA,  Old Forge NY, Woodloch Pines, The Bahamas, a cruise to Bermuda to celebrate their 50th anniversary, and a trip to Marco Island to celebrate their 60th anniversary.  Nick was the family historian and loved documenting these trips through home videos and photographs.  He and Netty also did some traveling on their own after retirement to the national parks, Alaska, Seattle, San Francisco, Makinac Island and Arizona for their grandson Kyle’s wedding

Nick was a fine craftsman and enjoyed tinkering in his workshop.  “Papa can fix it,” was a common refrain whenever one of the kids broke something.  He built Adirondack chairs, furniture, window boxes, wooden crafts and stained glass ornaments.   He loved using his 10% veteran’s discount at Home Depot.

Nick enjoyed working in the yard and helping others with their home projects too.  If you mentioned in passing you wanted to plant some new shrubs in your yard, he would go through the library in his workshop to find catalogs and gardening books and deliver them to you tied in neat twine. Then he would come over and help with the planting.  Whatever the home project, he had the right tools and was always willing to lend a hand.

He loved big band music.  Holiday gatherings were always filled with songs by Frank Sinatra, Dean Martin and others.

As he got older, he loved his computer for the ease it gave him to access his pictures, emailing his friends, and news and history sites. He never joined social media but would have loved it for the picture sharing feature.  He loved forwarding a good chain email, article about lawn maintenance, or link about NY history.

Of all the things Nick loved, he loved his family the most.  And we felt it every day.  We were lucky to have him for 93 years. He was patient, caring, interested, genuine, selfless – he always kept you on the phone as long as you’d like and ask you questions about your day and how work was going, and how the kids were doing.  He was a family man. He made everyone he talked to feel special. We are all better for knowing him and will strive to keep his legacy alive every day. We love you Papa.

Share Your Memory of
Nicholas
Upload Your Memory View All Memories
Be the first to upload a memory!
Share A Memory