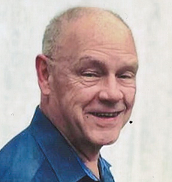 All services are private

Please share a memory of Robert to include in a keepsake book for family and friends.
View Tribute Book

On October 2, 2022, surrounded by loved ones, Bob Simon passed peacefully at home following a long illness.

Born Roberto Villar Simón, in Havana, Cuba on August 21, 1946, Bob immigrated to the United States with his family when he was 7 years old. Settling first in the Hell’s Kitchen neighborhood on Manhattan’s West Side, he attended Sacred Heart Grammar School and Rice High School where he forged many friendships that lasted long into adulthood.  After high school, Bob moved to New Jersey with his parents and extended family, where he resided for the remainder of his life.

Between 1966-1972, Bob served his adopted homeland as a soldier in the United States Army.  While deployed to Thailand during the Vietnam War, Sergeant Simon led a platoon and drove in the Transportation Corps. Bob completed his service, was Honorably Discharged and went on to earn a Bachelor of Arts in History from Seton Hall University. He maintained an interest in history throughout his life and enjoyed documentaries about military history and visiting historical sites when he traveled.

Bob became a naturalized citizen of the United States in June, 1974. He was a proud and patriotic American, who often expressed his gratitude and belief in the American Dream and the opportunities this country afforded him.

Bob had a long career as an Operating Engineer for the City of New York, where he was well liked and respected by his colleagues. He also owned a successful home inspection business in the 90’s and early 00’s. As a home inspector, he was noted for his attention to detail and honesty.

Bob loved fishing, chocolate, The Beach Boys, Cuban food, warm water, family vacations, the occasional dad joke, and Yankees baseball. His greatest love was his family. He was a devoted husband to his beloved wife of 48 years, Mary. Bob cherished every moment he spent with Mary and their children, Samantha and Elliot. He was a wonderful father who always put his family first. Bob was preceded in death by his parents, Rosalia and Ramón Martinez, as well as his sister Annie and brother Ed, and his beloved tías.

Those who knew him will remember Bob for his humor, kindness, decency and the respect with which he treated others.

Bob’s wish was for a simple cremation. In lieu of flowers, your donation to UMCOR/CWS or World Central Kitchen would help support two organizations whose purpose and missions reflect the love, compassion, and generosity for others that Bob embodied during his life.

Funeral Services have been entrusted to the Freeman Manalapan Marlboro Funeral Home and are private at this time.

Share Your Memory of
Robert
Upload Your Memory View All Memories
Be the first to upload a memory!
Share A Memory