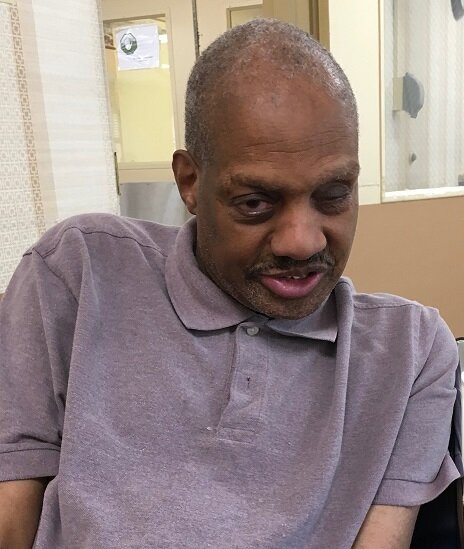 Please share a memory of David to include in a keepsake book for family and friends.
View Tribute Book

He was later diagnosed as autistic and developmentally delayed. He briefly attended school in Jackson, NJ. He lived in New Lisbon State Colony, and was later moved into a group home. The group home allowed him to thrive in a family setting, which was a positive experience. At the group home he enjoyed numerous activities including swimming, horseback riding, helping with tasks around the house, and even visiting in the community. He lived at the Atlantic Coast Rehabilitation Center in Lakewood, NJ since 2005.

David was gregarious and fun loving. He loved being home with his family, for the holidays.

Although he didn’t communicate well, he interacted with all who knew and loved him. He was determined to let you know what he wanted and pretty much got his way.

The last years of his life have been challenging, he suffered many illnesses and was hospitalized many times. David passed away on August 24, 2022, while taking an afternoon nap, at Atlantic Coast Rehabilitation Center.

David was loved by all who knew him! He will be laid to rest in Maplewood Cemetery, Freehold, NJ, beside his beloved mother, Ida B. Pearson, on September 14, 2022, at noon. There will a small graveside ceremony.

He is predeceased by his loving mother, Ida B. Pearson, his father, Henry Banks Sr, his beloved brother, Henry James Banks, Jr, and his sister, Charlotte Banks.

He leaves to mourn his, beloved sister, Birdena Brookins, her husband James, niece, Devanne Brookins and nephew Jarid Brookins and his family.  His nephew Robert Banks, and his family. His sister- in-law, Dorothy Banks, niece, Sharyn Brister, nephew Joseph Brister. There are a host of cousins and friends that will mourn his passing. Also, to mourn is our dear auntie, Valenia Winton and family.

There are many other family members and friends that will miss him. We would also like to thank Serenity Hospice, for their care.

Share Your Memory of
David
Upload Your Memory View All Memories
Be the first to upload a memory!
Share A Memory