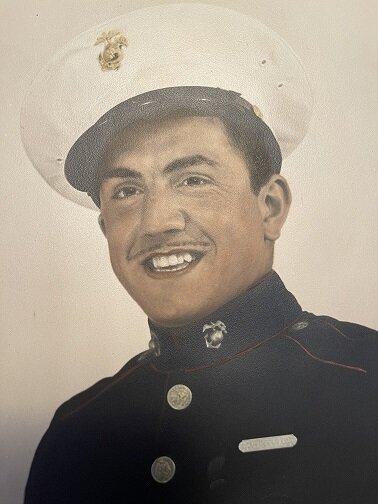 Please share a memory of Natale to include in a keepsake book for family and friends.
View Tribute Book

Natale M. Luchento age 97 passed away peacefully at home on June 8, 2022 in Freehold, NJ. “Nat” was born on June 4th 1925 in Jersey City, NJ. A son of the late Josephine and Gennaro both immigrants from Italy.

Nat was a Marine Raider Sharp Shooter in the Pacific Theatre during World War II. He was awarded the Purple Heart after being wounded in battle for his bravery during combat.

Natale was a part of the greatest generation who went to war without reservation, didn’t look for handouts, worked hard and built this country into the greatest nation in the world.

A devoted husband and father, Nat worked alongside his son Thomas in the Standardbred Business- breaking and training horses and then later in life in the kitchen of Luchento’s Country Italian Restaurant in Millstone, NJ where famous salads and dressings were loved by all.

Natale was predeceased by his wife Carmella, sons George and Michael and Great Grandson Nicholas.

Family and friends are invited to attend the visitation at Freeman Funeral Home, 47 E. Main St. Freehold from 10am to 11:00am on Friday June 10, 2022. A Funeral liturgy will be held at the Co-Cathedral of St. Robert Bellarmine, Freehold at 11:45am on June10, 2022. Entombment to follow at Maplewood Cemetery.

To leave a condolence or find directions, please visit www.freemanfuneralhomes.com

Share Your Memory of
Natale
Upload Your Memory View All Memories
Be the first to upload a memory!
Share A Memory