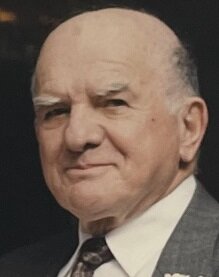 Robert Crawford, Sr., went to his eternal rest on May 20, 2022.  He was a lifelong resident of the Freehold area, moving from Freehold Borough to Howell Township. Robert graduated from St. Rose of Lima Grammar School; attended Trenton Catholic Boys’ High School; graduated from Freehold High School; and graduated from Monmouth College with an MBA. He was employed by A&M Karagheusian until he enlisted in the Army in 1952.  Robert began a civil service career starting at Earle Naval Weapons Station then Fort Monmouth where he retired in 1995, ending a 41-year career in the Defense Department.

Robert was active in his community.  He was a Councilman in Freehold Borough; Freehold Borough Little League, a member of the American Legion Post 54; Elks Lodge 1454; Knights of Columbus Council 1672, where he was a Fourth-Degree member and past Grand Knight. He was a devout and active, life-long parishioner of the St. Rose of Lima R.C. Church – where he served as an Usher for almost 60 years.

Robert was pre-deceased by his parents, Joseph and Mary (Schviavone) Crawford, and his brother, Carroll Crawford.  He is survived by his wife of 67 years, Barbara A. (DuPuis) Crawford; his children Robert J., Jr. (Sharon). Patricia A.; Michael K. (Joanne); Thomas J. (Michelle); Timothy F. (Theresa); and his grandchildren Daniel, Matthew, Michael, Danielle, Tyler, Christina, and Alexander; and his brother Michael (Marlene).

Share Your Memory of
Robert
Upload Your Memory View All Memories
Be the first to upload a memory!
Share A Memory