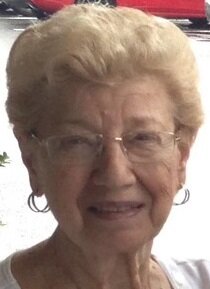 Born on Monday, January 20, 1930 in Manhattan, New York, Eleanor was the daughter of the late Alfanzo and Salvatrice Carbone.

Eleanor was raised in Brooklyn, New York as the youngest of 7 daughters. Eleanor married Benjamin DeCarlo on October 22, 1950 after Benjamin’s return home from World War II. The two were married nearly 70 years before Benjamin’s passing just two days prior to their 70th wedding anniversary. The couple lived in Bensonhurst, Brooklyn and raised their family of 4 boys there. After retirement, the couple spent much of their time vacationing on cruises. Eleanor spent her days in Brooklyn playing bingo in the neighborhood community centers, cooking for her family, and maintaining her reputation as the perfect hostess. She loved animals and always enjoyed watching her game shows on TV, even up until her final days. Eleanor was a strong woman with a loving heart who will be missed by all who knew her.

A Mass of Christian Burial will be held at 9:30 AM on Saturday, February 5, 2022 at Our Lady of Mercy Church located at 58 Main Street Englishtown, New Jersey. Interment will be in Resurrection Cemetery on 361 Sharrot Avenue in Staten Island, New York.  To leave a condolence or find directions, visit www.freemanfuneralhomes.com