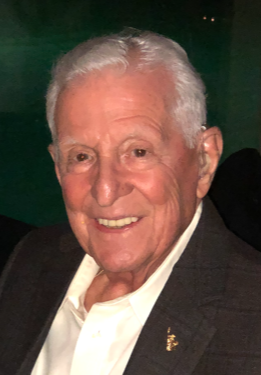 Please share a memory of Angelo to include in a keepsake book for family and friends.
View Tribute Book

Angelo was born in Brooklyn New York, but proudly liked to say he came from Coney Island. He moved to Marlboro New Jersey (Greenbriar) in 1991 where he lived happily with his wife Lily of 57 years before her passing in 2007. At Greenbriar, he had many friends who he considered family. Angelo was a member of St. Gabriel's Roman Catholic Church.

Angelo was born to Ciro and Anna Granata who are both deceased. He is also predeceased by his 6 siblings and their spouses.

Angelo was honored to call himself a Local 3 IBEW brother of 70 years where he again had many friends who he considered to be his family. After serving in the Army from 1946 to 1947, he worked at the Brooklyn Navy Yard Local 664 merging with Local 3 IBEW in 1961. In 1969 he was appointed as business representative retiring in 1991. He devoted himself to working on behalf of labor and the working man.

Family was everything to Angelo and his family adored him. He leaves behind his daughters Ann and husband Bob Tracey, Carmella Diver and husband the late Robert Diver, and Angela and husband Joseph Joven; his 8 cherished grandchildren Andrea, Robert, Scott, JoAnn, Joseph, Angela, LilyAnn, AnnMarie and their spouses; and his pride and joy 14 great grandchildren; Angela, Robert, Michael, Victoria, Matthew, Mattingly, Joseph, Scott, Lauren, Lily Mary Elizabeth, Annabelle, Thomas, Jackson and Milania. Angelo was also loved by many nieces and nephews, family, and friends. He will be greatly missed by many

Friends and family are invited to visit on Monday, January 10th, and Tuesday January 11th from 4:00pm to 8:00pm, at Freeman Manalapan Marlboro Funeral Home, 344 Route 9 North, Manalapan.  A funeral liturgy will be held at St. Gabriel's MAIN Church, 100 N. Main Street, Marlboro, on Wednesday, January 12th at 11:00am. Interment will follow at St. Gabriel's Cemetery and Mausoleum. To leave a condolence or find directions, visit www.freemanfuneralhomes.com

Please take advantage of the tribute wall tab to express your compassion and condolences. Feel free to share happy memories and photos.

Share Your Memory of
Angelo
Upload Your Memory View All Memories
Be the first to upload a memory!
Share A Memory