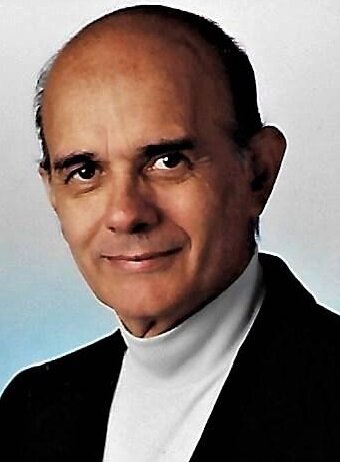 Richard William Santos, 91, formerly of Freehold Borough, New Jersey, died quietly in his home in Newark, Delaware in the early hours of November 26th, 2021.  He had celebrated a warm and beautiful Thanksgiving dinner with loved ones the night before.

Richard was born in Lowell, Massachusetts to Madeiran-American parents during the Great Depression and WWII.  A man who always lived to the beat of his own drum, Richard worked hard and dreamt of serving his country and adventures abroad.  He was an altar boy, paper boy, shoe salesman, diner manager, cotton-gin worker, factory manager, stone mason’s assistant, and married with a child all by the age of 18.

Richard spent the Summer of 1948, as a bell-hop at the Hotel Berkeley Carteret in Asbury Park, NJ during its heyday of exciting jazz entertainers and their patrons.  In the fall of that year, he enlisted with the US Marine Corps as an Aircraft Radio and Radar Repairman.

From 1951 through 1952, he served aboard the USS Rendova in the Korean War, earning him the Korean Service Medal with 2 Stars, U.N. Medal and the rank of corporal.  Upon his honorable discharge in 1952, he returned home to attend the Lowell Technological Institute — a formal beginning of a Telecommunications Engineering career that would sustain him for the rest of his long working life as a civil servant with the Department of Defense.

He spent the next three decades living and working overseas — 7 years in Japan, 23 years accompanying the 8th US Army in Seoul, South Korea, 10 years in communications supporting European Command in Stuttgart-Vaihingen, West Germany; returning to the United States in the 1990s to Tinton Falls, NJ, Anchorage, AK and Aberdeen, MD.  His work toward the end included being among the first federal employees flown via helicopter into the still burning 9/11 Ground Zero to advise on communications solutions and later, training young soldiers headed into the Middle East, on the critical importance of IED safety practices.  Shortly before his retirement in 2011, he was invited to the Pentagon Central Courtyard to receive the Defense Spirit of Service Certificate of Recognition in honor of his “extraordinary 57 year career for the Department of the Army”.

Richard believed in living in the moment — finding newness and love at the late age of 76 he opened his heart to marry for the third time.

He is survived by his loving wife of 15 years, Amelia Santos who gave him much comfort in his final days.

He is also survived by his children, Richard Jr., David,  Kenneth, Donna, Linda, Suzanne,  Julianna, Michelle and many grandchildren and many great-grandchildren.