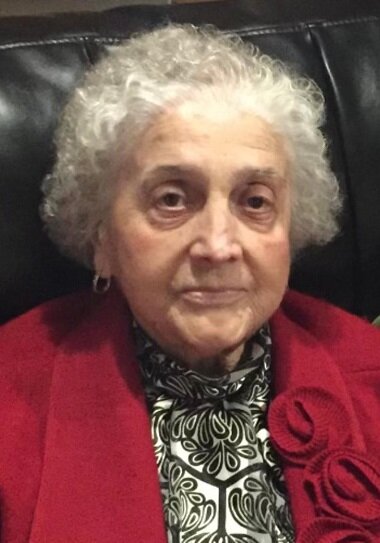 Johanna Eger departed this Earth on October 6, 2021 at the age of 93. She was born May 15, 1928 in Warsaw, Poland. Her family moved to Germany shortly before the outbreak of WWII. She lived in Germany during the entirety of the war.

After the war she met and married Kurt Eger. They had 5 children. In1956 they emigrated to the US, first taking residence in Keene, New Hampshire, then Roslyn, Long Island, then in the boroughs of Brooklyn and Queens in New York. Upon her Kurt's retirement she and he moved to Whiting, New Jersey. After his death Johanna moved to Old Bridge, New Jersey and then finally to Monroe Township, New Jersey.

She was a hard-working homemaker. Her husband Kurt and son-in law Roger Hennin both died in October, 1994. In 1998 she sold her house in Whiting, New Jersey and bought a larger one in Old Bridge, New Jersey for the purpose of helping her youngest daughter Margaret, who was now a widow, raise her 2 young children.

Johanna loved lilacs and the colors pink and green; was a dedicated fan of the Price is Right, Jeopardy and Wheel of Fortune. She spoke three languages: Polish, German and English and had a lovely singing voice. She was a member of the Monmouth Worship Center in Marlboro, New Jersey. She was not shy about expressing her opinions- within the family she was notorious for her many seemingly off the cuff remarks that came across as both brutally honest and comical at the same time.

Over the last few years she suffered from various health related issues, always recovering until recently when she succumbed to illness related to heart failure. She was surrounded by loving family as she took her last breath.

A Memorial service will be held at Monmouth Worship Center in Marlboro, New Jersey on Sunday, October 10th from 3-6 PM. Burial will be on Monday October 11th at 12 PM at Whiting Memorial Park in Whiting, New Jersey.

Share Your Memory of
Johanna
Upload Your Memory View All Memories
Be the first to upload a memory!
Share A Memory