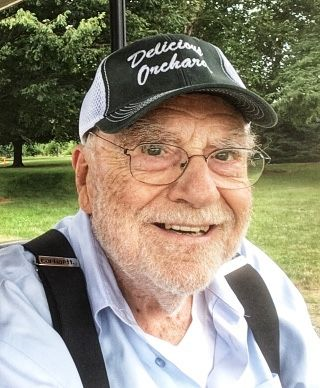 All services are private.

Carroll (Skip) W. Barclay, Jr., 94 of Colts Neck passed away on March 1st, 2021.  He was born on May 3, 1926 to Ruth Hutchinson Applegate and Carroll Wilson Barclay, Sr. at the family farm in Colts Neck, New Jersey.  He lived on the family farm called Delicious Orchards and in the same house his whole life.   He graduated from Red Bank High School in 1944.  He attended one semester in pre-med at Syracuse University but decided to return home to help his mother manage the farm in 1945.  Skip married Janet McDonald on July 10, 1948.

Skip rolled up his sleeves and succeeded to add 70 more acres of orchard in 1948.  With the advice from four uncles on both sides of the family he quickly learned the science and the business of fruit growing.   There were hard times in farming in the late 1950’s.  In 1959 he had his wife Janet took the risk and opened a small retail farm market to sell apples, peaches, cider and donuts.  It was called Delicious Orchards after the trade name of the farm.   One year later Janet started baking pies.  He had the help of Janet doing the baking and his sister Carolyn Smith at the store and brother-in-law William Smith overseeing the farm operation.  His mother always encouraged the endeavor.  Skip had the vision of giving customers high quality products at an attractive price.  They grew the business of almost 30 years and moved it to its present location at Route 34 in Colts Neck.

In 1977 Skip and Janet bought a farm in central Arkansas where they started a new pick-your-own venture selling apples and peaches direct to the customer.  After Janet’s death in 1993 Skip returned full-time to New Jersey.

Skip served as a Deacon and Elder of the First Presbyterian Church of Red Bank (Tower Hill).  He also served on the Colt Neck Zoning Board and Board of Education.  Later he served on the Rutgers University, Cook College Board of Managers.  He was a director of The First Merchants Bank.

Besides his parents, Carroll is predeceased by his beloved wife Janet and his sister Carolyn Smith.  He is survived by a daughter and a son, Martha Barclay of Berkeley, California and David Barclay of Colts Neck.  He is also survived by six nieces and nephews: Nadine Raley of Austin, Texas; Kathryn Dewitt and her husband Michael of Scarborough, Maine; Jane Murphy and her husband Tim of Jackson, New Jersey; Fred Mc Donald and his wife Robin of Jackson, New Jersey; Barbara McPheters and her husband Ralph of Okabena, Minnesota; Bonnie McDonald of Englishtown, New Jersey.

Freeman Funeral of Freehold, New Jersey is in charge of arrangements.  Services will be private.

Share Your Memory of
Carroll
Upload Your Memory View All Memories
Be the first to upload a memory!