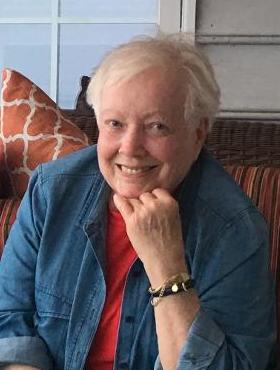 Carol Churchill “Cece” McDonald, 79, of Niantic, Connecticut passed away on Wednesday, November 4, 2020. Carol was predeceased by her husband Francis “Frank”; her son David; and brothers Benjamin and David. She is survived by her sons Patrick and his wife Sarah; Michael and his wife Terri; brother Jay and his wife Alison; grandchildren David, Charlotte, Madison and Piper; and a large and much-loved extended family.

Carol was born in Hackensack, New Jersey on December 17, 1940 to Walter Benjamin and Lois Jean Scherrer Churchill, the eldest, and only daughter, of their four children. Following a happy and carefree childhood, she attended Vermont College leading to work in the advertising industry in New York City where she met her beloved Frank, marrying him in 1963 and eventually establishing their family home in Matawan, New Jersey. She relished her role as wife and mother and was devoted not only to her boys, but to numerous children in the neighborhood, many of whom remained lifelong friends. She became an integral part of the community and was fortunate enough to enjoy amazing international adventures with Frank and the family as his career in advertising escalated. Sailing trips were taken, weekends were spent skiing, and the annual trip to Maine was much anticipated and never disappointed!

Following the untimely death of Frank in 1992. Carol went on to fulfil their dream of building a house on the water in Niantic where she enjoyed an active and social life entertaining friends and family. She tended to her garden, pursued her love of cooking, lunched with the ladies, and enjoyed long walks on the beach with her four-legged soul mate Spooner and, in later years, Luna. Evenings were spent watching the sun set on the Long Island Sound with a Canadian Mist in hand.

Carol derived most pleasure in life from spending time with her large, extended family. She passed on traditions, recreated family recipes, told tales from long ago, organized reunions, and watched with pride as her family grew. She waited patiently for grandchildren and when four arrived in quick succession, they brought her such joy. Visits to Cece were full of fun afternoons on the beach, coloring at the counter, bike rides, delicious meals, forbidden treats, and endless attempts to teach her how to use her cell phone!

Despite numerous barbed (and often highly inappropriate!) comments, Carol was the gentlest soul, kind and giving, and her passing has left a hole in the hearts and homes of those who were fortunate enough to have known her, and to have loved her.

Friends and family are invited for a Memorial visitation on Tuesday, November 10, 2020 from 11:00 AM to 12:00 PM, at Freeman Manalapan - Marlboro Funeral Home, 344 Route 9 North.  Burial of cremains will follow at Old Tennent Cemetery. To leave a condolence or find directions, visit www.freemanfuneralhomes.com

All are invited to celebrate and reminisce at Brioso, 448 Route 9 North, Marlboro.

In lieu of flowers, donations may be sent to the Re-Elect Trump 2024 Campaign…..joke!

Share Your Memory of
Carol
Upload Your Memory View All Memories
Be the first to upload a memory!
Share A Memory
Plant a Tree